A total of $1.2 million is earmarked for the public art component of the OAK Terminal 2 Improvement Program. The Oakland Museum of California implements and oversees this public art program and administers OAK's airport exhibition program on behalf of the Port. Three of the works are located in the post-security areas, while the other be may viewed by all visitors to OAK.

The first of four site-specific commissioned artworks, a glass window wall by Oakland artist Hung Lui, was unveiled in November 2006 in the recently opened Terminal 2 concourse. The three other commissions will be installed in the coming months in the Terminal 2 baggage claim building, the escalator wall by the Terminal 2 passenger security checkpoint and on the restroom entrance walls. 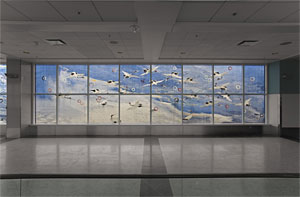 Travelers arriving at or departing from Gates 26-32 will view a stunning 160-foot glass window wall entitled "Going Away, Coming Home" by Oakland artist Hung Liu that features her signature "drip" technique. There are 80 red-crowned cranes incorporated into the glass panels which were selected by the artist specifically as symbols of blessings and safe travel. Coming to the new concourse later in 2007, will be four works of art on the privacy walls to the restroom entrances. These wall reliefs, borrowing their collective title from the Beatles' lyric "I am you, he is she, we are all together", are produced using a combination of limestone plaster, mirrors and glass.

Also to be unveiled later in 2007 is "Birds in Flight" a kinetic sculpture that will be located on the escalator wall just past the new Terminal 2 passenger security checkpoint. The sculpture will be made up of three pairs of aluminum "bird" wings programmed to bank left or right, flap up and down, and glide both in unison and independently.

All customers, whether they are the traveler or are picking-up or dropping-off a traveler, will have the opportunity to view the art presented on the media wall. In the new Terminal 2 baggage claim area, a media wall of 18 monitors will present a continuous loop of works by four Bay Area artists representing the diversity and vibrancy of the Oakland and Bay Area region.