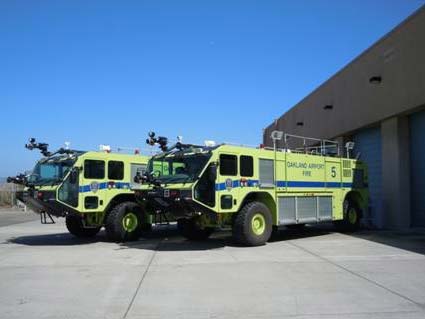 ARFF is a special category of firefighting that involves the response, hazard mitigation, evacuation and possible rescue of passengers and crew of an aircraft involved in an airport ground emergency. The 1,500 gallon units, manufactured by OshKosh, are an important addition to OAK’s emergency plan. They are in addition to three 3,000 gallon rescue vehicles that comprise a fully provisioned fleet for OAK’s ARFF program. The City of Oakland has provided ARFF services since the late-1990s.

“Together with our partners, Oakland International Airport’s priorities are the safety and security for all,” said Deborah Ale Flint, Director of Aviation for the Port of Oakland which owns and operates OAK. “We are proud of our City of Oakland firefighters and mutual aid agencies that remain ready to respond to airport incidents each minute of every day. These new ARFF vehicles are a reflection of investment and advancement in emergency response capabilities, and allow our personnel to continue their commitment to always being prepared.”

The new ARFF rigs, called Rescue 5 and 6, are equipped with the following state-of-the-art capabilities:

- Roof- and bumper-mounted turrets controlled by electric joystick inside the cab;

- When fully loaded, the 29-ton units carry 1,500 gallons of water, 210 gallons of foam, 500 pounds of dry chemical and 460 pounds of Environmental Protection Agency-approved Haoltron 1; and

- Rapid charge from 0 to 50 mph in 25 seconds, important when each second counts in an airport emergency response.

The combined cost of the two vehicles is $1.2 million. Funding is through a Federal Aviation Administration Airport Improvement Program grant and passenger facility charges. The Port expects to acquire a third ARFF rig in 2012. These vehicles replace older emergency units which are approaching the recommended lifespan of 15 years and are in need of replacement.