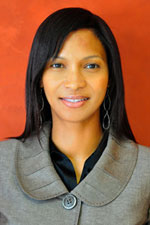 Oakland, Calif.—April 8, 2010—The Oakland Board of Port Commissioners has appointed Deborah Ale Flint as Director of Aviation for the Port of Oakland, owner and operator of Oakland International Airport.

As Aviation Director, Deborah Ale Flint is the primary executive responsible for the operation, management and business development of Oakland International Airport (OAK), and provides guidance on aviation issues to Oakland’s Board of Port Commissioners and staff. Ms. Ale Flint was appointed Acting Director of Aviation in August 2009. She is the first woman to hold this post in the airport's 83-year history, and the first African-American woman airport director in the Bay Area.

Port of Oakland Board President Victor Uno praised Ms. Ale Flint’s breadth of experience, both in the aviation and local communities. He explained, “Deborah's impressive track record during her 13 years at the Port, including eight months as Acting Director of Aviation, makes her, by far, the most qualified and highly-effective choice for this position. Additionally, her community involvement—from being a proud Oakland resident to her work on the national level within the aviation industry—gives her a unique perspective and a passion for her work."

Prior to her role as Acting Director of Aviation, Ms. Ale Flint was Assistant Aviation Director and formerly the Manager of Airside Operations at OAK, where she was responsible for overseeing Airside Operations, Noise Abatement and Environmental Compliance, Communications, and the Airport Operations Center. Other experience includes leading OAK’s Capital Program in which she coordinated the design, financing, and implementation of major airport projects, participating in the issuance of over $500 million in revenue bonds.

“During these challenging times for the aviation industry, Deborah's strong background in airport finance and major capital projects will help maintain Oakland International Airport's position as one of the most convenient, customer service-oriented, and cost-competitive airports in the country," said Port of Oakland Executive Director Omar R. Benjamin. "She will also be leading a great team of Aviation staff in meeting all of these opportunities in the days ahead," he continued.

Ms. Ale Flint shared her thoughts and vision on her appointment. “I am excited and honored to be chosen as the Port’s Director of Aviation. This action by the Board and Omar Benjamin represents another historical moment for Oakland International Airport. Oakland has a rich history for pioneering and innovation, from the airport’s early days with Amelia Earhart to being the country's first LEED Silver Certified airport passenger terminal. I look forward to leading the airport team in providing a contemporary, convenient, and reliable choice for savvy passengers traveling to and from the Bay Area.”