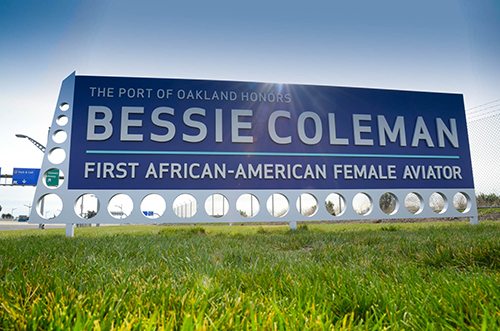 Part of Coleman’s aviation career brought her to Oakland, Calif. In 1923, she landed a job publicizing the Coast Tire and Rubber Company of Oakland and soon began appearing in the company’s newspaper ads.

The roadway name change is reflected on a large, four-foot-high street sign, which greets visitors entering Oakland International Airport's roadway loop. The Oakland Port Board of Commissioners passed an ordinance in September 2007 to rename a portion of Airport Drive to Bessie Coleman Drive. However, the formal designation of the roadway was delayed for several years due to major airport-related construction projects including a new air traffic control tower, the BART Connector to OAK, and terminal renovations.

"Everyone who travels along Bessie Coleman Drive will be reminded of this remarkable woman's extraordinary courage, passion and inspiration," said Oakland Vice Mayor Larry Reid. "Special thanks to the Port of Oakland and Oakland International Airport for playing a major role in celebrating Bessie Coleman, her achievements and her legacy."

“I am proud that Bessie Coleman’s legacy as the first African American woman pilot and the first African American to hold an international pilot's license will have a permanent home in Oakland,” said Congresswoman Barbara Lee. “Bessie Coleman was a trailblazer, an inspiration and the finest example of the remarkable contributions made by women of color in our nation’s history.”

In Europe, Coleman learned how to fly and parachute out of a plane and then trained to become a stunt pilot. Bessie Coleman became a media sensation when she returned to the U.S. She specialized in stunt flying, earning a living barnstorming and performing aerobatic flying.

In 1926, while her mechanic was piloting her plane, it suddenly spun out of control, resulting in both the mechanic’s and Coleman's death.

"Bessie Coleman taught us to pursue one's dreams against all odds," said Oakland Mayor Jean Quan. "This stretch of roadway named after her will be an important and constant reminder of never giving up on our aspirations."