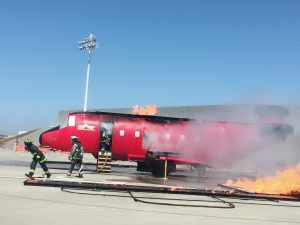 Oakland, CA – (September 13, 2018):  This week, Oakland Fire Department (OFD) firefighters stationed at Oakland International Airport (OAK) are undergoing a “Live Burn” training exercise, as part of the department’s annual training program.  Roughly fifty-five firefighters are participating in the training, which is being hosted at OAK for the first time.

OFD provides emergency response services at the Airport, with firefighters based at Aircraft Rescue and Fire Fighting (ARFF) Station #22, which is located between the iconic Oakland International Airport Tower and its runways.

“The safety of our customers is the top priority at Oakland International,” said Bryant L. Francis, Director of Aviation for the Port of Oakland. “We are proud to partner with local emergency response teams to aid in this effort, and the Oakland Fire Department has been a tremendous ally in that regard. This week’s training is a first at OAK, and we couldn’t be more pleased to host as we continue to strengthen our emergency preparedness and response capabilities.”

Training activities include two-hour morning in-class sessions for firefighters at Station #22, followed by a hands-on “live burn” exercises simulating a burning aircraft on the ground. Nearby residents and businesses should see minimal amounts of smoke, as the exercises use propane and water to mitigate environmental impacts. The exercise is permitted by the Bay Area Air Quality Management District.

Oakland International is the fourth busiest airport in California and second busiest in the San Francisco Bay Area. Serving over 13 million travelers annually, OAK is the closest airport to the region’s top business and tourism venues. It is also the closest airport for most local residents.

Oakland’s air service roster to over 60 nonstop destinations is offered on 14 different airline brands – seven of which operate with OAK as their sole gateway into the San Francisco Bay region.