- OAK Becomes a Major Gateway to the Hawaiian Islands - 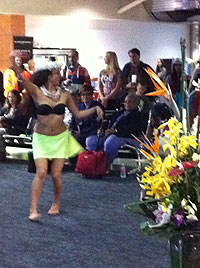 Passengers were welcomed aboard Alaska’s inaugural flight to Honolulu following a traditional Hawaiian music and dance performance, and welcoming remarks by both Alaska and Port of Oakland leadership.

“The Port of Oakland is extremely grateful to Alaska Airlines for inaugurating service between Oakland and Honolulu today, and for recognizing the opportunity for continued expansion of their Hawaii service here,” said Marily Mora, Assistant Director of Aviation for the Port, which owns and operates OAK. “Alaska has been our airline partner since 1983, and has offered excellent service to our mutual customers since then. We are pleased that they have had tremendous success with Maui, Kona and Lihue service.” 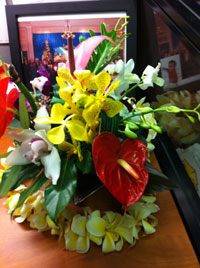 Hawaiian Airlines also plans to bring more paradise to OAK by adding seats this summer. Hawaiian flies daily nonstop service from OAK to its Honolulu hub, and has increased its seasonal nonstop service to Maui to year-round. From July 1 through Aug. 21, 2012, Hawaiian will offer daily service to Maui. The double-daily Boeing 767-300 wide-body, twin-aisle aircraft offer a comfortable flight for passengers.
Combined, the two airlines will offer 1,148 seats on six daily nonstops from OAK to the Hawaiian Islands in summer 2012. OAK has emerged as a major mainland gateway to the Hawaiian Islands, joining a select group of U.S. airports with flights to the four major islands.

About Alaska Airlines:  Alaska Airlines and Horizon Air, subsidiaries of Alaska Air Group (NYSE: ALK), together serve more than 90 cities through an expansive network in Alaska, the Lower 48, Hawaii, Canada and Mexico. Alaska Airlines ranked “Highest in Customer Satisfaction Among Traditional Network Carriers” in the J.D. Power and Associates 2008, 2009 and 2010 North America Airline Satisfaction Studies SM. For reservations, visit www.alaskaair.com. For more news and information, visit the Alaska Airlines/Horizon Air Newsroom at www.alaskaair.com/newsroom.
About Hawaiian Airlines: Now in its 83rd year of continuous service in Hawaii, Hawaiian is the largest provider of passenger air service to Hawaii from the state's primary visitor markets on the U.S. mainland. Hawaiian offers nonstop service to Hawaii from more U.S. gateway cities (10) than any other airline, as well as service to Japan, South Korea, the Philippines, Australia, American Samoa, and Tahiti. Hawaiian also provides approximately 170 daily jet flights between the Hawaiian Islands. Hawaiian Airlines, Inc. is a subsidiary of Hawaiian Holdings, Inc. (NASDAQ: HA). Additional information is available at www.HawaiianAirlines.com.