--Wall Mural in Terminal 2 Offers Travelers a "Change of Scene"--

Oakland, Calif. - Local artist, Jetro Martinez, has begun his weeks-long journey of entertaining and educating Oakland International Airport (OAK) users through his work in painting a custom wall mural in the Terminal 2 baggage claim area. Entitled "Lo Llevas por Dentro" (translation is You Carry it Within), the mural is one in a series that is being created especially for OAK and the community it serves. 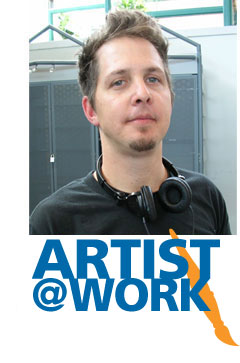 The Port of Oakland Public Art Committee, comprised of airport representatives and art experts, selected Martinez to create a unique custom mural for a temporary construction wall in OAK's Terminal 2 baggage claim area. The goal for this project is to promote conversations between the artist and airport users so that the public is engaged and educated, with the outcome of creating an aesthetically interesting mural appropriate for OAK, its customers and its community.

"Jetro Martinez paints murals of natural landscapes mixed with silhouettes using vibrant colors that are uplifting to view, encouraging weary travelers to take pause and reflect on the beauty of nature and, in particular, the Oakland landscape," said Juan Carlos Quintana, a member of the Port of Oakland Public Art Committee who also served on the artist selection committee for the mural project. "Martinez was chosen because his work provides a win-win situation for Oakland International Airport and for him as an artist. The airport receives a quality art project that enhances the environment in its public facility; the artist receives excellent exposure as thousands of people will view his work daily."

The artist began his on-site work on June 20 and plans to continue painting Tuesdays through Saturdays until project completion, which is expected on or about July 31, 2005. The mural will be on exhibit through December 2005, at which time the construction wall will be removed to allow for continued progress on OAK's Terminal 2 improvement project.

Martinez created the "Lo Llevas por Dentro" series, which evolved from his strong interest in nature and the human role within it. This artwork features natural landscapes that emphasize pattern and repetition in nature. Imposed over these landscapes are silhouettes of people with urban landscapes within each silhouette.

Specifically for OAK, the East Bay hills are the featured urban landscape with silhouettes of passengers moving through the airport. Each silhouette contains an urban landscape of the place from where each passenger has come, just visited or is traveling to. The artist's goal is to make people think about the complexity of nature, their place within it, the cultural traditions they carry with them, and how those are influenced by geography and ecology.

Martinez's decade-long career in public muralism promotes art as an educational tool and as a way for an artist to integrate into the community. "Public art not only makes people's lives generally better, but it gives them a visual respite from the everyday tedium of sensory bombardment," he said. The Veracruz, Mexico-born artist earned a Bachelor of Fine Arts degree from the San Francisco Art Institute. He currently resides in San Francisco where he teaches muralism in schools and has directed mural projects for the city.

OAK's custom wall mural is a project of the Port of Oakland's Public Art Program with generous support from Amoeba Records.

The Port of Oakland, which owns and operates OAK, adopted a Public Art Ordinance in 2002 to address the responsibility for how its operations and actions impact the social fabric and population it serves. The Public Art Ordinance makes public art a requirement for all major construction projects on Port property, including OAK, and for private development on land purchased and leased from the Port. The Port is committed to commissioning a wide range of artistic styles, forms, media and disciplines that characterize the breadth of contributions an artist can make to the public arena.

OAK currently has over 200 flights a day on 12 domestic and international carriers to 42 nonstop destinations, including Atlanta, Boston, the Hawaiian Islands, New York, Philadelphia, Washington, D.C., Mexico City and Mexico beach cities, and seasonal service to the Azores (Portugal), Costa Rica and Sun Valley, Idaho. OAK served 14.1 million passengers and handled 672,000 metric tons of cargo in 2004. The airport is a revenue division of the Port of Oakland, an independent department of the city of Oakland.

Since breaking ground in April 2004, OAK's Terminal Improvement Program is on track for completion in 2007. This $150 million program is the Port's largest aviation project in its 78-year history and includes the Terminal 2 improvement project which adds a new concourse with five additional boarding gates and waiting areas; expanded ticketing, security and baggage claim facilities; new utilities; and the Terminal Roadway and Curbside project that will improve terminal access and ease congestion in front of the terminals. Visit oaklandairport.com for more information.