Airport and Southwest Airlines leadership, along with representatives from both the Oakland and Reno-Tahoe visitors’ bureaus, plus a swarm of excited Southwest employees gathered at a Southwest arrival/departure gate for the announcement.

The new service includes three daily flights to Reno-Tahoe, a 50-minute trip from OAK and a once daily to St. Louis, a 3 hours 40 minutes trip.

Oakland is Southwest’s largest base in California. With 2400 employees, Southwest is the largest private employer in Oakland. 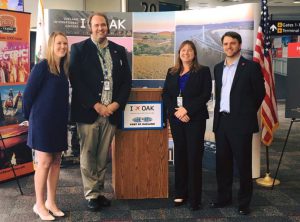 Oakland International is the fourth largest airport in California and second largest in the San Francisco Bay Area. With over 11 million travelers each year, OAK is the closest airport to the region’s top tourism and entertainment venues. It is also the closest for most local residents.

The airport currently offers air service to 49 destinations on 13 different airline brands – seven of which operate with OAK as their sole gateway into the San Francisco Bay region.