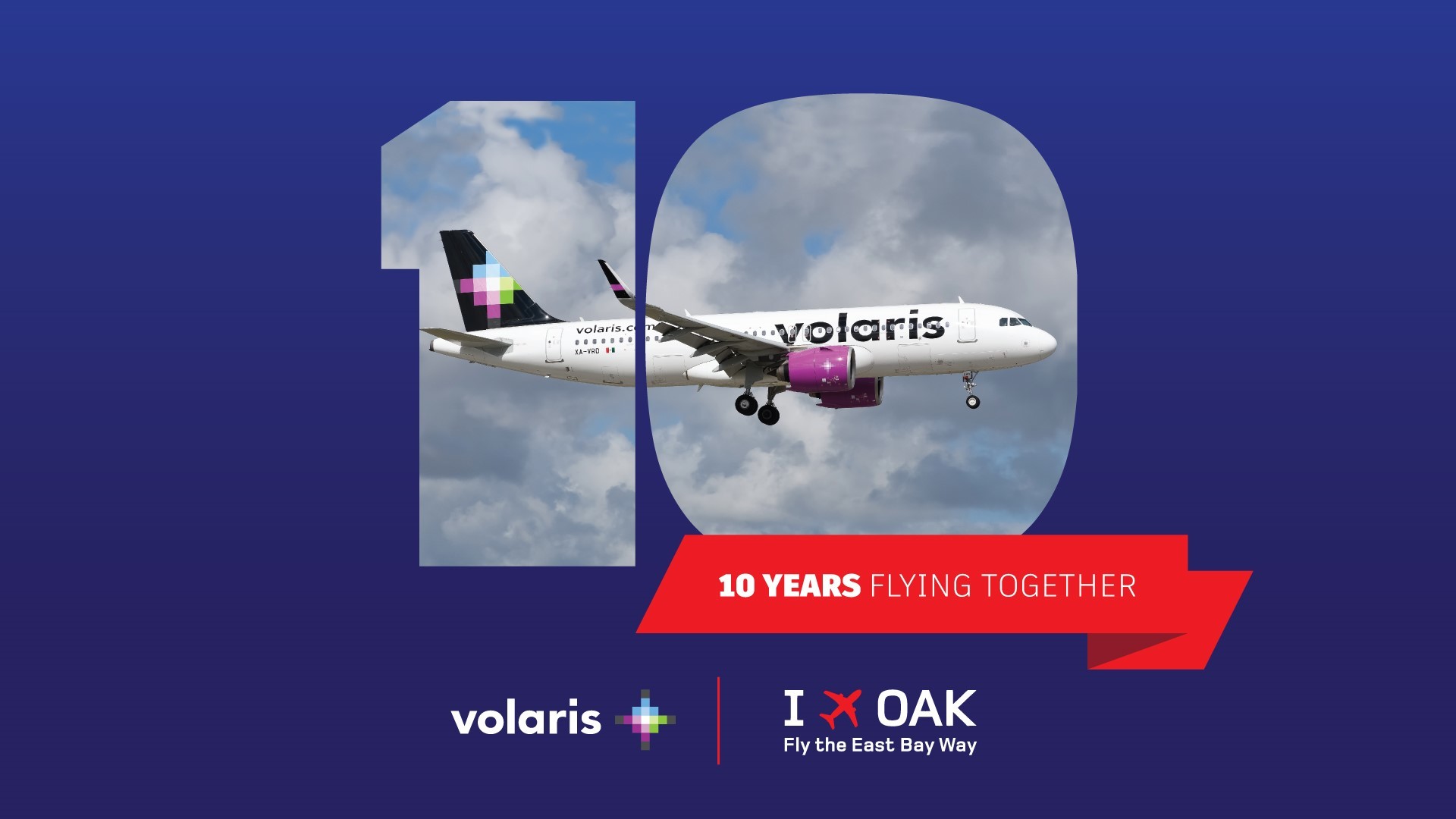 Oakland, CA: (May 15, 2019) – Oakland International Airport (OAK) and Volaris celebrate ten years of air service between the U.S. and Mexico. Volaris inaugurated service between Guadalajara, Mexico, and Oakland in  2009. OAK, along with LAX, were Volaris’ first two U.S. destinations.

Volaris, Mexico’s leading airline for destinations in the USA, serves both domestic and international destinations within the Americas, and is the largest domestic airline in Mexico.

“Volaris has been a tremendous partner at OAK over the last ten years, and we are delighted to share in the celebration of this significant milestone,” said  Francis. “We’re proud to have been selected by Volaris in its initial US expansion, and we look forward to many more years of this ever-strengthening partnership.”

“Volaris is proud to celebrate ten years flying between OAK and Mexico,” said Prowse.  “Since our inaugural flight, we have carried more than 10 million passengers between California and the USA.  Our business model of low cost and low “clean” base fares has made air travel more affordable and offered the opportunity to reunite families and provide opportunities for both leisure and business travel.  This is an important market for us and we continue to grow – in 2019 so far we have increased frequency from OAK to Guadalajara, Bajio and Morelia. We look forward to continuing our successful partnership with Oakland as well as to offering more opportunities for travel to Mexico for the residents of the Bay area.”

Volaris has carried over 1.7 million passengers to/from OAK over the past decade.

Oakland International is the most centrally-located airport in the 7.7M population Bay Area region, and closest airport to the region’s wealth of business and tourism venues. Oakland’s air service roster to over 60 nonstop destinations is offered on 12 different airline brands – five of which operate with OAK as their sole gateway into the San Francisco Bay region.

The vision of Oakland International Airport is to offer customers a world-class experience and be the airport of choice for Bay Area residents and visitors alike. OAK is operated by the Port of Oakland, which also oversees the Oakland seaport and 20 miles of waterfront. Together with its business partners, the Port supports more than 84,000 jobs in the region and over a million jobs across the United States.

"Volaris" (or the "Company") (NYSE: VLRS and BMV: VOLAR), is an ultra-low-cost airline, with point-to-point service that operates in Mexico, the United States and Central America. Volaris offers low base rates to stimulate the market, offering quality customer service and a vast choice of products. Since it began operating in March 2006, Volaris has increased its routes from five to more than 196 and its fleet from four to 80 airplanes. Volaris offers more than 384 daily segments on routes connecting cities in Mexico, the United States and Central America, with one of the most modern aircraft fleets in the Americas. Volaris focuses on passengers who visit friends and family (VFR), business travelers, and people who make pleasure trips in Mexico and to selected destinations in the United States and Central America. Volaris has received the Socially Responsible Company (ESR) award for nine consecutive years. For more information visit: www.volaris.com